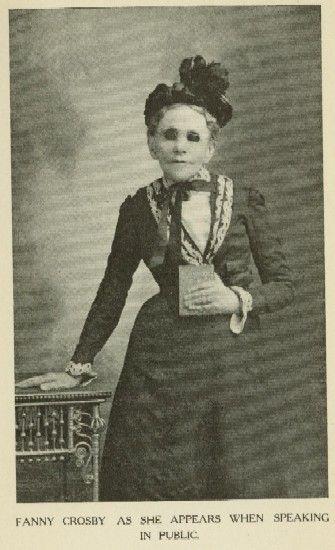 Fanny Crosby is one of the greatest of the world’s [English-speaking] hymn writers; perhaps only Watts and Wesley would rank above her. She is great in the number of her hymns — more than three thousand, and in the large number of them that have found favor with Christians and seem destined to live forever. To name only a few, what immortal glory belongs to the author of:

and many other hymns almost as well known.

Frances Jane Crosby was born in Southeast, N. Y., on March 24, 1820. She is now, therefore, eighty-six years old, but is still, I believe, in excellent health.

She has been blind since she was six months old, but she is of a happy, contented disposition, and refuses to be pitied because of her great affliction. Indeed, when only eight years old she wrote: —

“O what a happy soul am I!
Although I cannot see,
I am resolved that in this world
Contented I will be;

How many blessings I enjoy
That other people don’t!
To weep and sigh because I’m blind,
I cannot, and I won’t.”

Fanny Crosby spent twelve years as a pupil in the New York Institution for the blind, and then she was a teacher from 1847 to 1858, teaching language and history. While she was yet a pupil she was a splendid illustration of what education can do for the blind, and once she recited a poem on the subject before the Senate and House of Representatives at Washington, and also before the governor and legislature of New Jersey.

In 1845 she began to write words for the music of George F. Root, who became music-teacher in the institution. Many of these songs became famous, and the royalties on one of them, “Rosalie, the Prairie Flower,” amounted to nearly three thousand dollars. Another well-known song of hers is “There’s music in the air.”

It was not, however, till February 5, 1864, that she wrote her first hymn. It was written for W. B. Bradbury, and ever since that time he, and his successors, Biglow and Main, have been her publishers, accepting and paying for all that she writes. She has written many hymns for such singers and composers as Sankey, Doane, Lowry, Philip Phillips, Sweney, Sherwin and Kirkpatrick. Her songs have blessed thousands of lives, and there is scarcely one of them but has won many souls to the Saviour.

She writes very rapidly, and some of her most famous hymns have been dictated almost as fast as the words could be taken down. Her hymns are full of the Bible with which her memory is stored. When she was a mere child she committed to memory the first four books of the Old Testament and the four Gospels.

In her home at Bridgeport, Conn., the aged singer sits peacefully awaiting the call to the world where she shall see all beautiful things and shall join — and what voice will be sweeter? — in the song of Moses and the Lamb.

The memory hymn by her which we are to learn this month is “Speed away " — a song that has done much to arouse interest in missions. It has become the missionary farewell hymn, being sung at the parting with hundreds of missionaries as they set out upon their noble errands.

From: Rev. Amos Wells. Twenty-Four Memory Hymns And Their Stories Available from LutheranLibrary.org (ebook) and from Amazon (paperback)