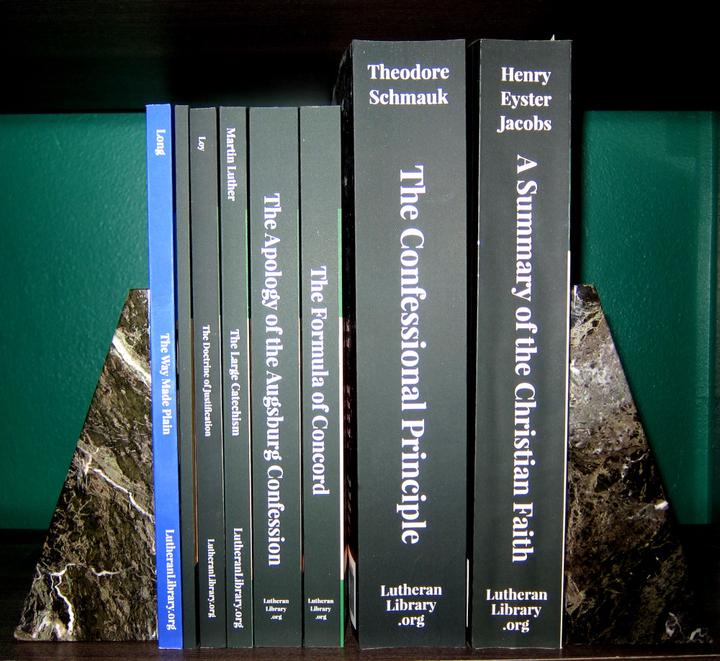 These books comprise a library of solid and faith-strengthening works for pastors and all Christians. They are flowering buds of American Biblical Christianity and the Lutheran (Protestant) Reformation.

Three Basic Books for New Christians and Everyone

(essential) The Way Made Plain Also in paperback

“I realize that this city, and all cities, are filled with people who have been unfortunate enough not to have the right kind of parents, who have been unfortunate enough not to have had the right kind of training, who have become busy, and so busy that they must be saved in a few months time or lost forever… We have in view during the next seven Thursday evenings to show the Way and make it plain to every intelligent one who will come and sit down in this center row of pews…” — Simon Peter Long

Luther’s Little Instruction Book (Small Catechism) has been translated into many of the languages of the world. Williston Walker in his History of the Christian Church describes it as “one of the noblest monuments of the Reformation”. Of it, Luther writes, “The Catechism is the Bible of the laymen. In it the entire body of Christian doctrine, which every Christian must know in order to be saved, is contained…”

“Human reason and inclination are always in their natural state averse to the doctrine of Justification by faith. Hence it is no wonder that earth and hell combine in persistent efforts to banish it from the Church and from the world. This great doctrine of the sinner’s justification by faith in the Redeemer of the world, who lived and suffered and died to save our lost race, is the very soul of the supernatural revelation given in Holy Scripture. But it is, therefore, also the doctrine against which the attacks of Satan are mainly directed, and against which the world and the flesh most obstinately array themselves.

“The attentive reader… will see that the matters here treated are not antiquated or obsolescent, but enter most deeply into the issues of the hour.” — Henry Eyster Jacobs

“It abounds in forcible illustrations, in exhaustive treatment of scriptural texts, in proofs from patristic literature and the history of the Church, overwhelming with confusion the arguments which the adversaries had drawn from the same sources. Its spirit is so mild and conciliatory, its style so clear and lucid, its language so animated and eloquent, its entire mode of reasoning so manifestly the sincere expression of a mind that has been long occupied and deeply agitated by the contemplation of divine things, that it cannot fail to deeply interest all devout students of Scripture. — Henry Eyster Jacobs

“Never was there a more careful and discriminating Church document written, guarding in each article against exaggerations on each side, and then, in most precise and definite words, setting forth the teaching from the Holy Scriptures on the subjects concerning which there had been misunderstanding and alienation of feeling.” — Henry Eyster Jacobs

This is Dr. Schmauk’s magnum opus on Christian Confessionalism, a treasure of approachable, Biblically Conservative scholarship. “This book is written in the belief that the one ultimate authority among men is truth.” – Theodore Schmauk

Theodore Schmauk’s exploration and defense of the Christian faith consists of five parts:

A Summary of the Christian Faith has been appreciated by Christians since its original publication for its easy accessibility and “frequently asked question” format. Henry Eyster Jacobs was both a teacher and a scholar. The volume also includes “Luther’s Speculations Concerning Predestination”.

The Augsburg Confession is the essential document of the Lutheran Reformation. The Saxon Visitation Articles were used by pastors to instruct their congregants in the basics of the Christian faith. They appeared in Saxon editions of the Book of Concord until the forced union of Lutheran and Reformed in the Nineteenth Century.