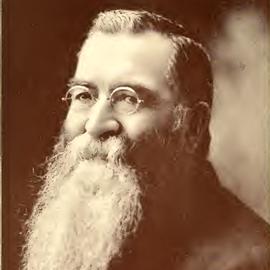 Revere Franklin Weidner (1851-1915), “was born in Center Valley, Lehigh county, Pa., November 22, 1851. He graduated at Muhlenberg College in 1869, graduated at Philadelphia Seminary in 1873. Married Miss Emma Salome Jones, of Philadelphia, July 10, 1873. Received the title of D.D. from Muhlenberg College in 1894, and in the same year the title of LL.D. from Augustana College and Theological Seminary. He was pastor in Phillipsburg, N. J., from 1873 to 1878. During two years of this time he was also professor of English History and Logic in Muhlenberg College. He was pastor of St. Luke’s Church, Philadelphia, from 1878 to 1882. Became professor of Hebrew and Greek Exegesis, Dogmatics and Ethics in Augustana Theological Seminary in 1882 and remained until the Chicago Seminary was founded in 1891. Since then he has been president of Chicago Seminary, till the Board of Directors, at his own request, released him in October, 1913, and made him President Emeritus. He has been Professor of Dogmatics, Hebrew and Greek Exegesis and Philosophy. He has substituted in practically every course in the seminary.”