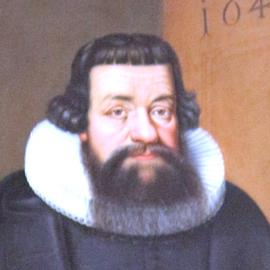 Nicholas Hunnius (1585-1643), a man of great learning, studied at Wittenberg and began to teach philosophy and theology in 1609. Elector John George I. of Saxony appointed him, in 1612, superintendent of Eilenburg, where he won the respect of his superiors and the affection of his congregation. He succeeded Leonhard Hutter, at Wittenberg, as professor of theology. In 1623 he was appointed pastor of St. Mary’s Church at Lübeck; the following year he became superintendent. (Wikipedia)