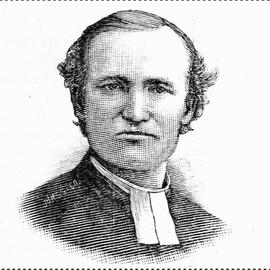 The subject of this sketch was born in Sweden Aug. 4, 1846, his parents being Sven Anderson, a man who was for a while the owner of considerable wealth, and Nilla Jepsen.

In 1853 he emigrated with his parents to America and located in Moline, Ill, where Rev. and afterwards Prof. L. P. Esbjorn dispensed the gospel among his countrymen. In 1856 Rev. O. C. T. Andren came and took charge of the Moline church as its first pastor. Mr. Andren was our subject’s first Sunday school teacher and confirmed his older brother, Carl. That same year they moved to Spoon Timber, Knox Co., Ill., four miles from Watoga and eight miles from Galesburg. Here Mr. Telleen spent six years, during which time he got only eight weeks school. His father having lost his wealth, and being reduced to poverty, the boy was obliged to do work, such as herding, chopping wood, and general farm work, at first as a “half-hand” but at sixteen years of age as “full-hand.” Concerning his experience in those days Brother Telleen writes:

“I had one boot of each kind, and one of them was torn, and I had no money for which to get it mended, so I covered it with the other when in church. In my early boyhood I spent hours at a time in reading God’s holy word, in prayer and singing. My dear mother early warned me against all manner of sin. Father was very strict with us. My first three years in this country were spent in school entirely. I bent all my energies on learning English, and neglected God’s word in a measure. I loved to skip classes, be praised and called the teacher’s pet, but my inner life paid the penalty. Though never out in sin and shame or flagrant wrong, I yet was cold and had forsaken my first love to God. Meanwhile my hunger and thirst for knowledge was keen. I devoured everything readable that I come across, newspapers put on walls for example; even creeping under the bed to read. The multiplication table I worked out and learned walking behind the plow.

My mother, like Hannah of old, set me apart for the holy ministry from my earliest existence. Her hopes were ever buoyed up as only a mother’s hopes are. In my seventeenth year God brought me again unto himself and let me recline on his bosom. 1 John 1:7 was the passage that brought peace to my soul.

The spirit now strove with me to have me prepare for the holy ministry. I withstood him long, considering myself unworthy, as I truly was. At length I left the decision to the Lord, telling Him I would open the Bible and whatever passage my eyes lit on should be God’s voice to me. i opened the Bible at random and my eyes lit on Jer. 1:5. But I asked to turn once more, with Gideon of old, and took far enough ahead to reach the New Testament. The Bible opened and my eyes lit on the words, “Fear not; henceforth thou shalt take men.” I was bound. I obeyed. Mother rejoiced. Father gave his consent. He started me with a plain suit of clothes, $5, and paid my first term, adding, “Now Johnnie, this is all I can ever do for you. Now you must swim or sink.” My feelings may be guessed.

Father soon repented of having let his strongest boy leave home, but our reformation festival that year saved me. Augustana College and Seminary that year, 1864, numbered but thirteen students. Rev. P. Ericson, then a student, afterwards Pastor of Gethsemane church, Chicago, now deceased, insisted on me taking part. What was said afterwards influenced father, and he allowed me to stay.

Dr. Hasselquist spoke well of me to the Board and I was given everything free. I have reason to think that he even sent me cash at times. The Lord repay.

Now followed battles, inward and outward, during eight years, which I can not recount, for want of space.

In my second scholastic year I was taken sick and wondered if I ought not regard it as a God-send to keep me away. I then met my ever faithful Prof. Hasselquist. Told him of my poor health and also of an offer made by a New York Insurance Co., of $5,000 a year. The Doctor lifted his cane, planted it heavily before him, saying, “If you do not return to school I doubt even if you will get to heaven.” I trembled and said, “Professor, I am coming.”

In 1872 he was ordained at Galesburg, Ill. His first charge was Des Moines, Ia., to which field the Synod had sent him already in 1870, and where he had spent the vacations of 1870-1. Here he was blessed with a large revival in 1872-3. Many of the pillars of Des Moines today are the fruits of that visitation.

In 1877 he traveled through the Indian Territory, in company with Mr. C. C. Seaberg, now deceased.

In 1879 his health failed, his left lung having begun to bleed. He then went to Colorado and Mexico.

The Mission Board called him to Denver, which call he accepted.

Of his experience there he says: “We slept on the floor, ate on a chest, sat on trunks, lived in a house where the snow beat in.”

In 1882 he was enabled by brothers John and Carl Johan Samuelsen to explore Utah and California, which had before been visited by Kevs. Auslund and Rydholm.

The result of that visit was the establishment of the work in Utah, there being now three pastors in that field; the organization of “The Ebenezer Church” in San Francisco, a nucleus to our California work. The Swedish Augustan a Synod has now six pastors in the Golden state.

In the summer of 1890 he moved to Lindsborg, Ks., and is now connected with Bethany College.

We close this sketch with a brief extract from a communication of Rev. Telleen to the author of this volume, which we know will be read with interest and profit:

“During my time I have often been delivered by divine interposition and miraculously aided.

God has ever and everywhere raised up kind people to succor me. Such was for example the Norwegian lady of Chicago, who gave me an entire suit of new clothes, the Norwegian student who gave me a warm coat, Mr. Conrad Frick of Denver, who stood by me like a banker, all the while that our church was being built.

I have had many and varied experiences. Sorrows and troubles have not been wanting but the Lord has helped in all. To Him be all the glory!

One person I must not forget to mention, my dear wife, formerly Mary Anderson. I say it, and I mean it, had it not been for her we might yet have had no strong church in Des Moines; as yet no work in Denver, where now goes up the finest almost in our Synod; in Utah had no mission District and the seventh Conference (the Pacific) yet been wanting in the Augustana Synod. God bless the woman, who uncomplainingly goes wherever God sends her husband, always saving, always neat, always cheerful!

I love youth and children, and have myself six of them.”