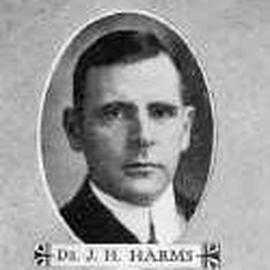 John Henry Harms (1876-1946) graduated from Newberry College in 1893 and from the Gettysburg Lutheran Theological Seminary in 1897. His brother, John Edward also graduated from the Gettysburg Seminary and was a Lutheran preacher. His first pastorates were in Chambersburg, Newport, and Harrisburg, PA. In the summer of 1908, he was notified by telegram of his election to the presidency of Newberry College. He accepted the call and served until 1918. During this period, in 1912, he received his D. D. from Erskine College, Due West, South Carolina. In 1918, he began his work at the Lutheran Church of the Holy Communion in Philadelphia. He was to continue in this call for 27 years, resigning in 1945. During this pastorate he also served as the president of the Board of Publications of the United Lutheran Church. And, in 1945, received a Litt. D. from Newberry College. [Source: findagrave.com, “John Henry Harms”]